"God is Holy, and He will not lower His standard of righteousness to the level of our ignorance. We have no excuse for our ignorance. God has clearly and fully revealed His will. The Bible is in our hands, and we cannot plead ignorance of its contents except to condemn our laziness. God has spoken, and by His Word we shall be judged."
~ Arthur Pink, "The Seven Sayings of the Saviour on the Cross"
Posted by Denise at 6:40 PM No comments: 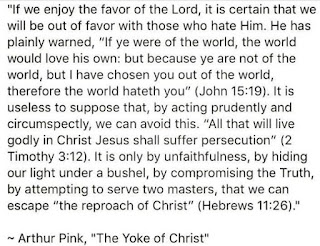 God Waits To Be Gracious

"Therefore will the Lord wait, that He may be gracious unto you, and therefore will He be exalted, that He may have mercy upon you: for the Lord is a God of judgment: blessed are all they that wait for Him" (Isaiah 30:18)
"So often God allows things to get worse before there is any improvement. He "waits to be gracious." Why? To bring us to the end of ourselves and of our resources, till all seems lost and we are in despair: that we may more clearly discern His delivering hand."
~ Arthur Pink, “The Life Of Elijah”

This is like what Jesus did with Lazarus. He deliberately waited two days after hearing of his death, in order to glorify the Father and to teach others about the nature of death for the believer, total depravity of those dead spiritually (helpless and powerless), and about the resurrection. What was sad for Mary and Martha, was to OUR benefit. What was joyous for them in the temporal, was for the growth of their faith and our's>

Joh 11:4  But when Jesus heard it, He said, "This sickness is not unto death, but for the glory of God, that the Son of God may be glorified by it."
Joh 11:5  Now Jesus loved Martha, and her sister, and Lazarus.
Joh 11:6  When therefore He heard that he was sick, He stayed then two days longer in the place where He was.

Joh 11:39  Jesus *said, "Remove the stone." Martha, the sister of the deceased, *said to Him, "Lord, by this time there will be a stench, for he has been dead four days."
Joh 11:40  Jesus *said to her, "Did I not say to you, if you believe, you will see the glory of God?"
Joh 11:41  And so they removed the stone. And Jesus raised His eyes, and said, "Father, I thank Thee that Thou heardest Me.
Joh 11:42  "And I knew that Thou hearest Me always; but because of the people standing around I said it, that they may believe that Thou didst send Me."
Joh 11:43  And when He had said these things, He cried out with a loud voice, "Lazarus, come forth."
Posted by Denise at 10:06 PM No comments:

Colossians 3:9-11 “Do not lie to one another, since you laid aside the old self with its evil practices,
and have put on the new self who is being renewed to a true knowledge according to the image of the One who created him—
a renewal in which there is no distinction between Greek and Jew, circumcised and uncircumcised, barbarian, Scythian, slave and freeman, but Christ is all, and in all.”
Those who have been regenerated by the power of God unto salvation have put on the new self which is according to the same image- the image of the Lord Jesus Christ, and they all share in the same mind, the same doctrine, the same conduct, and the same persecutions, regardless of race or social standing.
So such social distinctions are of no regard for regenerated believers, because they all are being conformed to the same image. Those who would make much of fleshly distinctions do so because they themselves have not been joined to Christ nor do they conform to that One image.

S. Lewis Johnson: How To Deal With False Teachers

Tit 1:10  For there are many rebellious men, empty talkers and deceivers, especially those of the circumcision, 11  who must be silenced because they are upsetting whole families, teaching things they should not teach for the sake of sordid gain.