Historian Who Popularized Gender As A Social Construct for Power, Retracts

A Canadian historian who popularized the notion that gender was a social construct is regretting he ever said that.

Christopher Dummitt is an associate professor at Trent University’s School for the Study of Canada. On September 17, Quillette published an essay in which he explains his past conviction that “sex was wholly a social construct” “all about power,” admits that his “big idea” has run roughshod over biological common sense and freedom of speech, and offers a “mea culpa for my own role in all of this....”


By his own admission, he could “cherry pick” details because “history is a big place. And so there was always something to find....”
Dummitt maintains he was on “safe ground” to the extent that he “stuck to the documents, and reconstructed how people talked in the past,” but the conclusions he drew from them were “intellectually bankrupt” because they “came from my ideological beliefs — even if, at the time, I wouldn’t have described this as ideology....”
“And that’s why I was so angry and assertive about what I thought I knew. It was to hide the fact that, at a very basic level, I didn’t have proof for part of what I was saying. So I stuck to the arguments with fervor, and denounced alternative points of view. Intellectually, it wasn’t pretty. And that’s what makes it so disappointing to see that the viewpoints I used to argue for so fervently — and so baselessly — have now been accepted by so many in the wider society.”

~End quote. LifeSiteNews
Cherry picking from history to fit one's presuppositions and ideology, or suppressing study findings, happens all the time  in "science". It happens with the global warming "scientists" too. They throw numbers at you, but you have to ask some critical questions and do some digging to find out the context and truth. For example:

In 2015 the mythical "97% of the world's scientists agree global warming is real, man-made, and dangerous", except that's not true. According to Ian Tuttle:
The “97 percent” statistic first appeared prominently in a 2009 study by University of Illinois master’s student Kendall Zimmerman and her adviser, Peter Doran. Based on a two-question online survey, Zimmerman and Doran concluded that “the debate on the authenticity of global warming and the role played by human activity is largely nonexistent among those who understand the nuances and scientific bases of long-term climate processes” — even though only 5 percent of respondents, or about 160 scientists, were climate scientists. In fact, the “97 percent” statistic was drawn from an even smaller subset: the 79 respondents who were both self-reported climate scientists and had “published more than 50% of their recent peer-reviewed papers on the subject of climate change.”
Surely the most suspicious “97 percent” study was conducted in 2013 by Australian scientist John Cook — author of the 2011 book Climate Change Denial: Heads in the Sand and creator of the blog Skeptical Science (subtitle: “Getting skeptical about global warming skepticism.”). In an analysis of 12,000 abstracts, he found “a 97% consensus among papers taking a position on the cause of global warming in the peer-reviewed literature that humans are responsible.” “Among papers taking a position” is a significant qualifier: Only 34 percent of the papers Cook examined expressed any opinion about anthropogenic climate change at all. Since 33 percent appeared to endorse anthropogenic climate change, he divided 33 by 34 and — voilà — 97 percent! When David Legates, a University of Delaware professor who formerly headed the university’s Center for Climatic Research, recreated Cook’s study, he found that “only 41 papers — 0.3 percent of all 11,944 abstracts or 1.0 percent of the 4,014 expressing an opinion, and not 97.1 percent,” endorsed what Cook claimed. Several scientists whose papers were included in Cook’s initial sample also protested that they had been misinterpreted. “Significant questions about anthropogenic influences on climate remain,” Legates concluded.
~End quote.  National Review

Or how about global warming's emailgate as I reported:
"Three themes are emerging from the newly released emails: (1) prominent scientists central to the global warming debate are taking measures to conceal rather than disseminate underlying data and discussions; (2) these scientists view global warming as a political “cause” rather than a balanced scientific inquiry and (3) many of these scientists frankly admit to each other that much of the science is weak and dependent on deliberate manipulation of facts and data."

SCIENTISTS AT TWO OF THE WORLD’S LEADING CLIMATE CENTRES - NASA AND NOAA - HAVE BEEN CAUGHT OUT MANIPULATING TEMPERATURE DATA TO OVERSTATE THE EXTENT OF THE 20TH CENTURY "GLOBAL WARMING".

The evidence of their tinkering can clearly be seen at Real Science, where blogger Steven Goddard has posted a series of graphs which show "climate change" before and after the adjustments.
When the raw data is used, there is little if any evidence of global warming and some evidence of global cooling. However, once the data has been adjusted - ie fabricated by computer models -  20th century 'global warming' suddenly looks much more dramatic.
This is especially noticeable on the US temperature records. Before 2000, it was generally accepted - even by climate activists like NASA's James Hansen - that the hottest decade in the US was the 1930s.
End quote.

Bold, red are my emphasis.
Posted by Denise at 6:25 PM No comments:

Posted by Denise at 3:34 PM No comments:

Christ On The Cross: dealing with some errors

The Father did not abandon His Son, in whom He was well pleased, at the cross. Jesus was always pleasing to the Father because He is part of the Triune Godhead,  and this is also why there could never be any abandonment or separation between any of them.

This article by Doron Gladden goes into detail on this topic. He also deals with Thabibi Anyabile's claims and error as well as a bit of Austin Duncan's (on Ps 22 where he states "Jesus is evil incarnate").

I looked up the Greek word for "in" in 1 Peter 2:24 which is what Duncan refers to at the 18:25 time mark as listed below, and the Greek word is the preposition "en" which can (and here, should) be translated "on":

1Pe 2:24  and He Himself bore our sins in His body on the cross, that we might die to sin and live to righteousness; for by His wounds you were healed.

Just as the bull did not have sin put into it as a temporary atonement for the sins of Israel (it could never take away sin), Jesus too, did not have sin put into Him; both had sin imputed to them (counted as if they had), but it was not actual. It was substitutionary. Neither had a sin nature. Yet Duncan clearly believes Jesus had sin inside Himself while on the cross. This is blasphemy (and it's gnostic too, I believe, because it alludes to a different Jesus on the cross versus the One who prior to the crucifixion was sinless).

Some of Duncan's claims about Jesus on the cross:

God could not look upon sin especially in His own Son 17:38

Jesus bore our sins in His body on the cross 18:25

No Christian should ever use the terms "wretchedness" and "misfortune" in describing Christ Jesus on the cross. Neither of those words are biblical and promote sin and happenstance, which clearly is impossible with the God of Scripture.  And to accuse Christ as having sin "in" Him, and that He was "evil incarnate" is absolute blasphemy. He was without sin, a perfect and pleasing sacrifice on the cross in the place of elect sinners. Is. 53 as well as the New Testament say that the Father was well pleased with Him and that He is without sin.

Psa 22:24  For He has not despised nor abhorred the affliction of the afflicted; Neither has He hidden His face from him; But when he cried to Him for help, He heard.

Isa 53:10  But the LORD was pleased To crush Him, putting Him to grief; If He would render Himself as a guilt offering, He will see His offspring, He will prolong His days, And the good pleasure of the LORD will prosper in His hand.
Posted by Denise at 10:00 PM No comments:

Mark Dever To Be Professor At SBTS

Mark Dever was just named a professor at Southern Baptist Theological Seminary. Al “Look at Who I Platform” Mohler made the announcement August 27. Dever is pastor at Capitol Hill Baptist Church in Washington, DC. At Capitol Hill Baptist Church’s Christians and Government Core Seminar (their name for Sunday School Adult Education), a church elder taught a course on Justice. Or, more specifically Social Justice. The series of classes began June 9 and concluded September 1. Our source provided the handout for the Week 10 class. It promoted Identity Politics and the Social Justice agenda. The class was taught by a church elder, according to our source who attended.

They went on to say:


Viewing justice through the lens of group identity is dangerous. Justice should be concerned about individual actions. We are culpable for our sins, and not the sins of our fathers, grandfathers or children and grandchildren. As it is written, “The soul who sins shall die.”
As we previously reported, a Sunday School class at Capitol Hill Baptist Church promoted Identity Politics. At that time, a leading member of the congregation who taught seminary classes at one Southern Baptist institution and sat on the board of trustees for another Southern Baptist seminary, promoted Identity Politics.
End quote.

Photos of the hand out and more info here.

Dever said in 2015 (I deal with why he is totally wrong and this is actually a false doctrine):
"Therefore for us to conclude that we must agree upon a certain view of alcohol, or a certain view of schooling, or a certain view of meat sacrificed to idols, or a certain view of the millennium in order to have fellowship together is, I think, not only unnecessary for the body of Christ, but it is therefore both unwarranted and therefore condemned by scripture."  (italics, original)
"So if you’re a pastor and you’re listening to me, you understand me correctly if you think I’m saying you are in sin if you lead your congregation to have a statement of faith that requires a particular millennial view. I do not understand why that has to be a matter of uniformity in order to have Christian unity in a local congregation." (italics, original, bold, my emphasis)

Enemies Within the Church website reports (along with video) that SBTS (connected to the SBC) of which Mohler is president, has three professors "Jarvis Williams and Curtis Woods, along with provost Matthew Hall, are shown clearly promoting Neo-Marxist ideas at the Southern Baptist Theological Seminary and in internet videos." Apparently Moss took over for Obama's pastor of 20 years, Jeremiah Wright--it's a church that promotes Black Liberation theory and helped indoctrinate Obama's hatred of whites in America.

The SBC and men like Ligon Duncan and Mark Dever have embraced the sodomite Anglican priest Sam Allberry.

And who they conference with includes  I-Will-Fight-Error-But-Not-My-Friends-John MacArthur:

At the Gettys' Sing 2019 conference 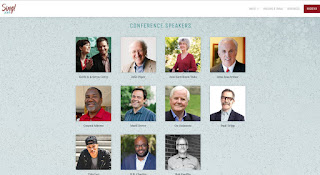 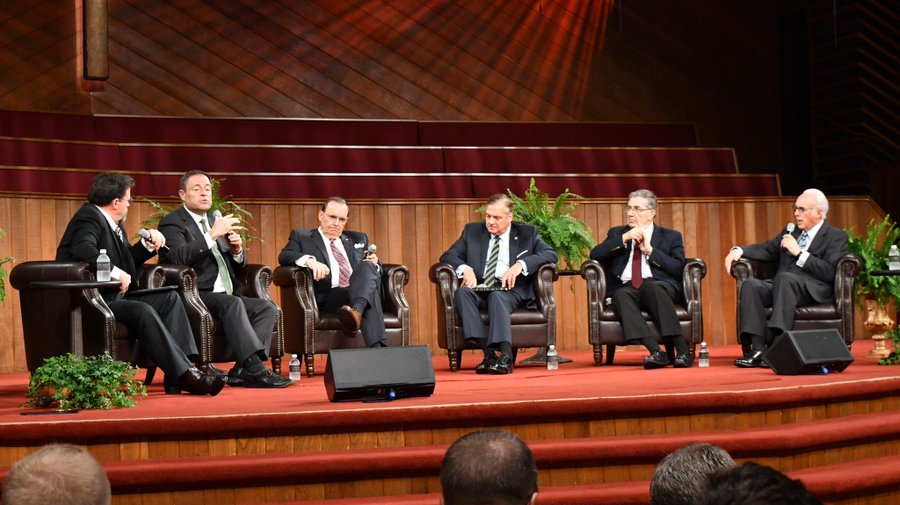