There's No Such Thing As "Mental 'Illness' " 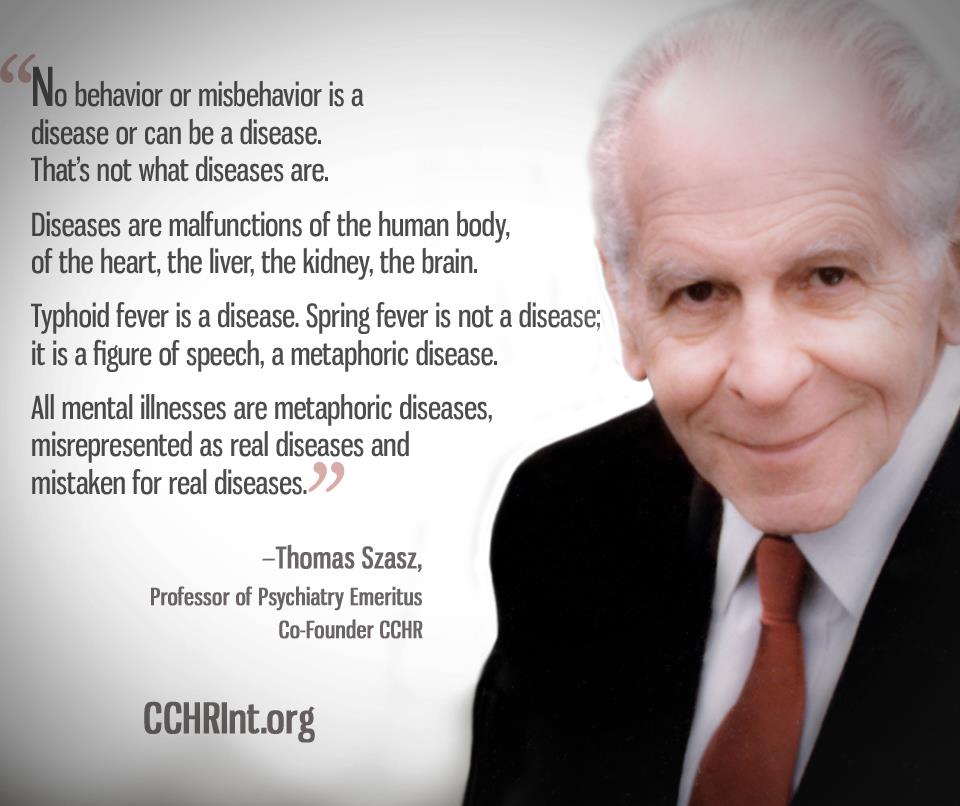 “No biochemical, neurological, or genetic markers have been found for Attention Deficit Disorder, Oppositional Defiant Disorder, Depression, Schizophrenia, anxiety, compulsive alcohol and drug abuse, overeating, gambling or any other so-called mental illness, disease, or disorder.” — Bruce Levine, Ph.D., psychologist and author of Commonsense Rebellion
“Unlike  medical diagnoses that convey a probable cause, appropriate treatment and likely prognosis, the disorders listed in DSM-IV [and ICD-10] are terms arrived at through peer consensus.”— Tana Dineen Ph.D., psychologist
“It’s not science. It’s politics and economics. That’s what psychiatry is: politics and economics. Behavior control, it is not science, it is not medicine.”— Thomas Szasz, Professor of Psychiatry Emeritus
“No claim for a gene for a psychiatric condition has stood the test of time, in spite of popular misinformation.” — Dr. Joseph Glenmullen, Harvard Medical School psychiatrist
“In reality, psychiatric diagnosing is a kind of spiritual profiling that can destroy lives and frequently does.” — Peter Breggin, Psychiatrist
“…modern psychiatry has yet to convincingly prove the genetic/biologic cause of any single mental illness…Patients [have] been diagnosed with ‘chemical imbalances’ despite the fact that no test exists to support such a claim, and…there is no real conception of what a correct chemical balance would look like.” — Dr. David Kaiser, Psychiatrist

~Excerpts from CCH
Posted by Denise at 8:31 PM No comments:

Why Tim Challies Can’t Be Trusted


The most glaring example is when he apologized for rightly criticizing Ann Voskamp after she contacted him to get together for dinner and discuss things. He contended after that contact that she was a fellow Christian. But she’s not. She’s a pagan (panentheism, Romanistic, mystic, spiritual sex, extra-biblical revelations/visions, which Challies admitted to in his original critique of her “One Thousand Gifts” book, prior to her contacting him when he suddenly backpedaled).

How bad is Voskamp's spiritual erotica? It begins:

“God makes love with grace upon grace, every moment a making of His love for us. Couldn’t I make love to God, making every moment love for Him? To know Him the way Adam knew Eve. Spirit skin to spirit skin?”

“I fly to Paris and discover how to make love to God.”

*There’s a whole lot more than these particularly in the chapter about flying to Paris (starting around p. 201), but you get the point.  Eros is NOT agape, let's be clear about that. But this is what John Piper does with his "Christian hedonism" as well, after all "hedonism" comes from "hedone" and "HEDONE was the spirit (daimona) of pleasure, enjoyment and delight. As a daughter of Eros (Love) she was associated more specifically with sensual pleasure. Her opposite number were the Algea (Pains). The Romans named her Voluptas." Moreover, Piper is obsessed with "pleasure" and "delight" and feelings, even invoking "ecstasy": "Never forget, the point of the kitchen is the banquet. The aim of hermeneutics: happiness. The goal of exegesis: ecstasy."

For a non-apologetic critique: https://reformationcharlotte.org/2019/07/22/please-women-stop-reading-ann-voskamp/

Additionally Challies is a hypocrite when it comes to discernment and discernment bloggers, giving grace (“we should think the best”, ie have no opinion, wait and see re: CJ Mahaney and Sovereign Grace Ministries sexual abuse charges --Mahaney’s church went to court about sexual abuse under his leadership, spiritual abuse, highly charismaticism) to false teachers like Rick Warren or Ann Voskamp, yet he assigns motives to discernment bloggers (“they often operate by fear and are marked neither by truth nor love”). https://surphside.blogspot.com/2013/04/challies-and-discernment-bloggers-his.html