2Jn 1:10 If anyone comes to you and does not bring this teaching, do not receive him into your house or give him any greeting, 11 for whoever greets him takes part in his wicked works.

Nicholas Batzig contemplates the issue of Tim Keller having N.T. Wright to share the platform at Keller's church Redeemer Presbyterian Church in this article. I had addressed this problem back in March here. After the damage has been done (typical of today's "Christian leadership") its a little too late to be concerned about it, not to mention surprised. I will say at least Batzig sees something wrong, which is far more than Keller, his church, or apparently his Presbytery sees.

I'd like to take note of a few things, however.

Keller did the same thing as Piper (even in regard to this VERY issue on Justification by Faith alone): give poison to your audience and label it as "grace" and "tolerance" to "engage" in conversation and consider your brother's point of view. Its "fair and balanced", or so they think. Scripture says its damnable doctrine and the elders especially are to not only rebuke, but SILENCE such nonsense. In other words, don't even GREET such a man, otherwise YOU TOO partake of his WICKED DEEDS.

Tit 1:7 For an overseer, as God's steward, must be above reproach. He must not be arrogant or quick-tempered or a drunkard or violent or greedy for gain,
Tit 1:8 but hospitable, a lover of good, self-controlled, upright, holy, and disciplined.
Tit 1:9 He must hold firm to the trustworthy word as taught, so that he may be able to give instruction in sound doctrine and also to rebuke those who contradict it.
Tit 1:10 For there are many who are insubordinate, empty talkers and deceivers, especially those of the circumcision party.
Tit 1:11 They must be silenced, since they are upsetting whole families by teaching for shameful gain what they ought not to teach.

This passage alone shows the failure of not just Keller, but Piper and others who continue to defiantly support them in their SIN. Yes, its SIN to offer false teachers to their sheep. Its SIN to NOT silence false teachers. Its sin because it violates the direct and numerous COMMANDS of God to elders. And its SIN because its MORE THAN GREETING a false teacher, its INVITING HIM to feed off of the sheep they were supposed to protect!

Its Treason and its Derelction of Duty. Its unfaithfulness to the Lord and to the vulnerable sheep.

One thing that was noted by Batzig is that N.T. Wright was passing through to sell his wares. Moreover he was also prostylitizing with his heretical views, however subtle. But his bait was his book on "Christian character". Its a way to get more people to consider his rank heresy--the book is the bait, the poison is the NPP. Yet the "leadership" continue to think, he can't be that bad if he's right on "Christian" character, afterall. Right?

"My one critique would be that reliance upon the grace of God to accomplish our sanctification is assumed by Wright but not discussed prominently; at one point in the lecture, Wright parenthetically reminds us that “of course, all this is to be done by [God’s] grace alone through faith [in Christ] alone.” I suspect this oversight is due to deficiencies in Wright’s understanding of Union with Christ and to his convictions regarding the role of good works in the future justification of believers." - Batzig

This is the same issue with Doug Wilson and John Piper. But I digress.

A heretic cannot help but bring in his heresy in vital areas,(dare I say all areas, of one degree or another) because according to Scripture, its all connected. Once the water is poisoned, its ALL poisoned. Scripture likens it to the leavened loaf. Jesus said to stand your guard against such loaves.

Perhaps the litte-too-late concern by Batzig is due in part to his relationship with Keller and RPC:

"I know Dr. Tim Keller and RPC well enough to say without reservation that he and his church are NOT advocates of the NPP.My intent here is not to call into question RPC’s full commitment to a Reformed understanding of Justification by faith, as expressed in the Westminster Confession of Faith."

This is dangerous because people do change their doctrine over time, either for good or for bad. They are either growing in biblical doctrine and godliness, or away from biblical doctrine to ungodliness. There is no neutrality. I've seen first hand how people who were once thought of as sound, years later proved to be quite unsound and disqualified from their leadership position. But no one had a clue until after they witnessed this change (and typical of today's "leadership" were UNWILLING to pull the guy from the pulpit, but let him repeat his inane empty talk for two services).

This also demonstrates what I've seen repeatedly: compromise of doctrine because of a relationship.

Furthermore, Keller IS an advocate of NPP simply by inviting the heretic to his pulpit. This is also what Phil Johnson said about Piper not being an advocate of Warren. The wolf knew it and used it to his advantage. His latest book was merely the foot in the door or the bait.

Here's a question for these men who claim its not an advocacy of such teaching: is the invitation of someone "solid"considered to be advocacy of what they teach? In other words, if the church/pastor agrees outwardly with the doctrine of a man, his invitation is considered support of it. If he "disagrees" (silently or otherwise), its now considered NOT supporting it? Do you see the hypocrisy here? The pulpit is used to teach the sheep. Its support of the teacher, period.

Here's a follow up question: if offering heretics in the pulpit is not support or advocacy, then what would you call it? And what exactly, would it look like for the pastor to NOT SUPPORT such nonsense in his pulpit?

Besides all that, who would want to and who could try to sift out Wright's infamous teaching of heresy and just cling to that which he think is good? That's just thinking its possible, even desireable to sift through the vomit, and find something nutritious to eat. Rather Scripture says to outright reject not only the teaching but the man as well! Look at what Paul said about Hymenaeus and Philetus in 2Tim. 2:16-19, or John regarding Diotrophes in 3John9-10.

1Th 5:21 but test everything; hold fast what is good. 22 Abstain from every form of evil.

Finally, Batzig says: "My concern is that in attempting to expose the Body of Christ to Wright’s helpful teachings on Christian character, they may have unwisely exposed that Body to questionable teachings that would undermine its assurance of salvation and proper understanding of Justification by faith alone, the doctrine upon which the Church stands or falls.”"

I saw this would happen, as did Ken Silva and others. Yet no one heard us, nor believe us. Same re: Pipergate. This is EXACTLY what Jesus was talking about when He warned the disciples to BEWARE of the leaven of the Pharisees; to avoid false false prophets and false brothers. Wright can't separate his damnable heresy on justification by works from the rest of his theology, so why did anything think he would and more importantly why did anything think THEY could? The man not only infused his heresy in his teaching, he was selling his wares at the back of the church! A den of thieves to be sure!

What's even worse is that Batzig, like so many, think that the doctrine of Justification by works is merely "questionable" NOT DAMNABLE. Furthermore, he brings the Justification by Faith to the foundation of the church...rather it should be brought back clearly to The Gospel and Salvation of individuals. Without the RIGHT Gospel, one is unsaved and earning Hell. Its about the LOST SOUL, not the foundation of some invisible church. I think I know what he's trying to say, but he's already lost the battle by minimizing the issue to something optional

Its impossible to bring in a wolf and not expect him to do wolf things. The bread is leavened. You can't UNleaven it. 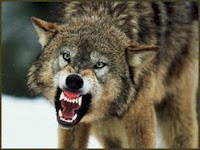 The Wolf came, goreged on the sheep, and moved on. Such easy prey! Even the shepherd was too easy!

He'll be back. With his friends.